The forever whimsical Mrs Barbara Nice was right when she said “You don’t get this at live at the Apollo with Michael McIntyre” last night when I was oh-so gratefully offered two free tickets to see another of Fizzog’s charismatic performances.

Following my last review on their not so traditional family pantomime I was invited to see something completely different.

The 50% funnier show comedy tour brought to life one or two of the characters from the panto but surprised its audiences with so much more. With a fresh and without any pre show prejudice as ever I walked into the hall not knowing what to expect; with the flyer above in mind I was quite frankly a little nervous.

Yes it had it’s innuendo’s but looks were almost entirely deceiving.  There were a lot and I mean a lot of suggestions made and some nudity but somehow they hit the nail on the head (sorry to any dirty-minded people, that is the cleanest cliche I could think of).

Instead of vulgar or remotely awkward it was very clever and remained tasteful enough to be family friendly ish. Even trying to remain unbiased about the generous invitation the performance was rehearsed to an admirable slickness where the characters were relatable in some ways yet still had that comedy timing that makes you chuckle without fail. Not only were the cast masters of the funny but masters of the versatile too.

Whether it be demiurge tribute act ‘Fabba’ one minute, the rambling school children or loveable and my favourite the four old ladies another it is quite easy to forget that there isn’t 50 or so actors back stage. Every member of the cast and i’m sure crew quite obviously pulled their weight into creating such natural characters you can’t help but fall for. 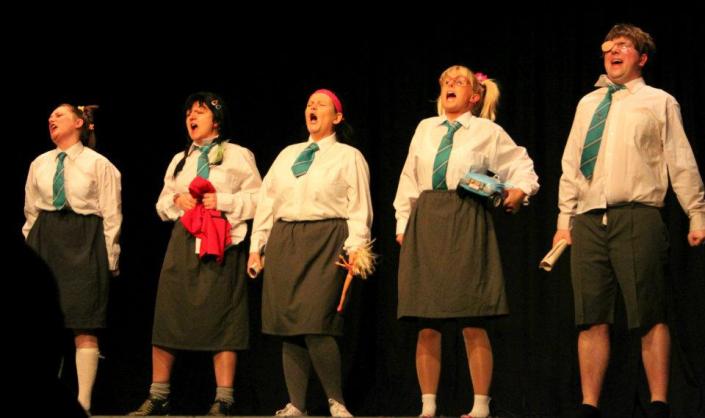 Whilst the fictional characters fitted together so complimentarily the compere Mrs Barbara Nice could not have been more suited to the role. Within seconds she had even the grumpiest looking of audience members up and dancing and wanting to win that glorious Fray Bentos pie in her raffle prize collection. To say she set the tone of the evening feels like a massive understatement; In many ways she set the expectations very high from the start with her down to earth and blunt hilarity. The fizzog’s and their honorary member Nice have a great deal of potential but most importantly they seem to have remained true to their USP. They are real and joke about real things and always in the witty black country dialect you can’t helped but get sucked into. Yes fizzog you’re right, those tips from Take a Break are pretty darn good.

Even with its rapidly growing loyal fan base with people coming much further than the black country there was not a dry eye in the house. I didn’t quite need my inhaler as promised but boy was I close within seconds of the four old ladies ingenious ‘single ladies’ entrance.  With a new radio show coming soon you really need to watch this space. Scarily close to perfection. So so Bostin!

For having the guts to be starkers on stage, James Collins!

This entry was posted in Theatre reviews, Uncategorized.

Thank God for Father Christmas – Theatre performance of The Lion, The Witch and The Wardrobe

I hope this doesn’t make me a bad person for writing  a review on an amateur performance as if it was one of a higher calibre but I’ve always felt that if you are going to charge above an amateur price threshold then you should expect a review reflective of an audience member with slightly higher expectations.  I totally understand the  consequences that may be apparent in particular for critiquing young persons but I have been critiqued similarly myself and seen enough decent youth theatre performance’s to feel the word youth is not a valid reason for an overpriced performance. I’m truly sorry if that causes offence to anyone.

I bought the tickets for ‘The Lion the Witch and the Wardrobe’ at The Crescent Theatre Birmingham on a complete whim without really knowing what to expect. I prefer not to hold any judgement before a show begins so I didn’t do any research before hand and paid a slightly above average 8 pound student ticket for this amateur performance, which I thought, was a reasonable gamble to see one of my all time favourite childhood classics. It was only when I reached the theatre I learnt that ‘Theatre Company School’ was a youth theatre with a cast of young persons of around the age of roughly 8 to around 19 (I have no way to prove this otherwise despite research, apologies). Having been a member of a youth theatre myself in the past I had certain expectations about what to expect and what not to.

So on to my first observations. The set? Well there was none. It made me wonder what the higher ticket price profit went on but still I thought that went some way to provoking imagination and I looked forward to how the space would be filled. This is a children’s classic of course, I awaited the magic eagerly.

The first line? I wish I could think of something more positive to say but unfortunately I had no idea what was said. This theme went on when other members of the audience quite obviously struggled to hear what was being said and it made for a slightly awkward atmosphere as it became increasingly difficult to decipher what was going on. It was difficult to comprehend the narrative before the noisy snow machine came on but then things just took a turn for the worst. It was a great shame because there were a few great actors I would have really liked to have heard.

The snow machine was a great little gimmick so it was a shame the audience were left trying desperately hard not to choke too loudly over the mumbling actors. That bit certainly was the most magical part of the performance for me however and the young fairies didn’t just play on the cute factor but  I felt that they had a greater enthusiasm than some of the older children. Perhaps some of the older cast members could take a lesson in being bothered.

Another memorable moments for me was the  floating Snow Queen. Thumbs up for not falling over. Especially for the younger children it was a nice touch and it added a great fantastical element. The unconventional way of travelling that is, not the stability ,although, given the task it was quite impressive.

The iconic wardrobe wasn’t how I expected it to be at all. It was curiously formed with pieces of fabric held into a rough door shape by the cast. The idea itself was a unique and creative interpretation but It was just a shame it seemed considerably unrehearsed. Fidgeting, mumbling and missed cues throughout was what really let the performance down, even throughout the most important scenes it felt more like a blocking rehearsal than a final performance.

The final scenes were I hate to say shocking for all the wrong reasons. Having seen youth theatres pull off professional stage combat with foils before maybe I am slightly biased but that night was the first time I ever saw an actor roll their eyes in annoyance and play with their trousers whilst being ‘stabbed’. It was a strange and a slightly anti-climatic reaction to conclude the play with.

Every young actor on that stage had potential but the whole approach to the performance didn’t allow this to be fulfilled. The actress who played Aslan was brilliant, she spoke clearly and expressed herself noticeably well but was poorly directed and quite frankly deserved a bigger role. There were other noticeable actors too who caught my attention for the right reasons from the beginning of their role but seemed to get bored as the show went on . If I simply felt that the young actors were responsible then, as harsh as it may seem I would have named them but with this performance it wasn’t the case at all.

The few minutes where the charismatic and fun Father Christmas came on stage finally injected a bit of energy into the performance. Honestly, that was the best thing that could have happened at that time and was very much-needed to keep my attention. The youngest of the kids especially really showed some great moments of skill and performed some of the most coordinated choral speech I have seen from actors of all ages and having seen plenty of choral LAMDA students perform, I have seen plenty of speeches.

Those moments of skill made it so obvious that given the right direction and a little bit of enthusing some members of the cast did have what it takes to be successful in a more professional performance, and that was the saddest thing about it. Stage lights and lots of lines are daunting for most children but one thing that children do naturally have is a flow of great energy that under the right direction can create amazing things. The direction of this C.S Lewis classic didn’t really come close to filling the  studio stage at all. Whoever was in charge of this performance really missed a trick.